Save 10% when you buy coffee in bulk!  Click here to browse our beans.

1st Wave coffee began in San Francisco in 1850 with the incorporation of the Pioneer Steam Coffee and Spice Mills, which by 1872 would become Folger’s Coffee. The idea behind Pioneer Steam was to remove coffee roasting from the home (where children often roasted the beans), commercialize it and sell it in stores. In 1892 Maxwell House was founded, expanding the reach of the commercial coffee industry, and by the late 1980’s was the top selling coffee in America. 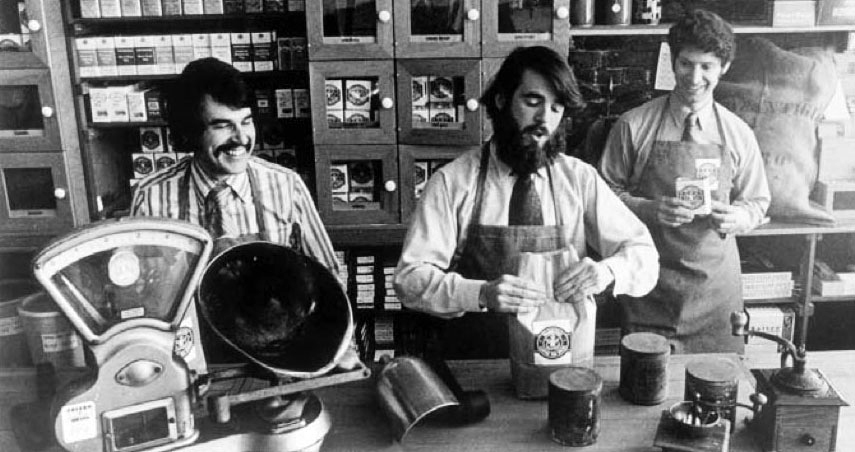 2nd Wave coffee began in 1966 with the formation of Peet’s Coffee in Berkeley, CA. Peet’s was America’s first major roaster and coffeeshop chain. Starbucks, founded in 1971, was modeled after Peet’s with all 3 Starbucks’ founders having been trained to roast by Alfred Peet. Starbucks popularized coffeeshop culture, a positive customer experience and along with Peet’s emphasized dark roasted beans and specialty grade coffee.

Hallmarks of 2nd Wave coffee: Specialty drinks, homogenized coffeeshops, coffee lingo and an emphasis on Arabica beans instead of the cheaper, less flavorful Robusta which had dominated instant coffee for generations. 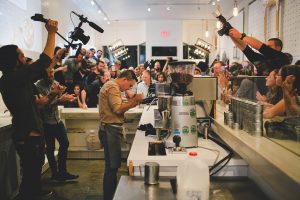 3rd Wave coffee was developed in the late 1990’s. Intelligentsia (Chicago, IL), Stumptown (Portland, OR) and Counter Culture (Durham, NC) are all credited with being the first coffee companies to reconsider the entire craft of coffee from farming at origin through to the finished cup in hand. 3rd Wave Coffee now dominates American coffeeshop culture with the larger coffee conglomerations appropriating terminology and innovations from smaller coffeeshops and companies, and more recently simply buying them up in efforts to consolidate and eliminate competition. Peet’s, for example, now owns Stumptown and Intelligentsia.

4th Wave coffee: We’re told that there’s a 4th Wave underway, but it’s not yet been defined. Our guess is that it involves a combination of improved farming techniques (essential as the planet warms) and far more nuanced ways of brewing coffee as seen, for example, by the innovative Decent DE1 espresso machine. Drop us a line if you have any thoughts as to where 3rd Wave ends and a true 4th Wave begins.